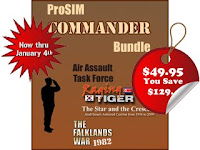 To celebrate the publication of Pat's new book, Media War: The Media-Enabled Insurgency in Iraq, detailing the struggle between the US military and the enemy to shape US public opinion about Operation Iraqi Freedom, Shrapnel Games is offering the ProSIM Commander's Bundle. This special, limited-time offer packs together four full length ProSIM titles at one amazing price! For only $49.95 you'll get to download Air Assault Task Force, The Falklands War: 1982, Raging Tiger: The Second Korean War, and The Star and the Crescent. That's only $12.49 a game, a 72% savings.

Hurry! This offer only lasts one week, until Tuesday, 4 January 2011.

To get Pat's book, Media War: The Media-Enabled Insurgency in Iraq, click here.
Posted by Pat Proctor at 14:16 No comments: 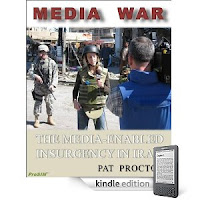 In Operation Iraqi Freedom, insurgent and terrorist groups have developed the capability to use small, relatively insignificant tactical attacks, amplified through the megaphone of the media, to erode the will of the American public to prosecute the war. This capability has neutralized the overwhelming advantage the US military has in firepower in Iraq by bypassing it completely.


This is ProSIM's first Kindle-exclusive title and Pat's first full-length book. This book is the culmination of over two and a half years of study of the US military, the insurgency, and the media in Iraq, including lessons learned from Pat's six months working in Iraq on the front lines of the media war.

To get Media War: The Media-Enabled Insurgency in Iraq, click here.

You can get the Kindle software free for your PC by clicking here.
Posted by Pat Proctor at 17:50 1 comment:

Perhaps no single person has had as lasting an impact on the collective American perception of the Vietnam War as Stanley Karnow. As a correspondent on the ground in Vietnam for such publications as Time, Life, the Washington Post, and the Saturday Evening Post, he shaped the perception of the war as it was being fought. After the war, as chief correspondent for the early eighties WGBH television series “Vietnam: A Television History” (later repackaged as a PBS American Experience series) he compiled the collection of images that has become America’s visual understanding of the war. His written companion to this television series was Vietnam: A History. With well over a million copies in print, it is the most pervasive, if not the most comprehensive, history of the war. The first third of the book recounts the French experience in Vietnam, beginning with first colonization and ending with the Paris Accords that finally brought France’s exit from the country. The rest of the book is dedicated to America’s involvement in the conflict, culminating in the evacuation of the US embassy and the North’s conquest of South Vietnam.

On one level, Karnow has done a much better job than many other journalists-turned-historians in detaching himself emotionally from the conflict. He has avoided many of the heavy-handed caricatures of the American leaders who prosecuted the war found in other Vietnam histories. But on another level, the book is firmly grounded in his personal perception of the war as a journalist. He often cited his own conversations with players in Vietnam at the time to illustrate his points. Furthermore, from places where the narrative dwells, one can clearly identify among his sources, even when unnamed, men such as Lt.Col. John Paul Vann, with whom he had extensive interaction during the war. Still, Karnow did do a good job of reexamining several common misconceptions that had emerged by the early 1980s about the conflict. For instance, he admitted that the Phoenix program--a CIA program to infiltrate and eradicate the Vietcong “shadow government” in rural South Vietnam--was much more effective than he acknowledged at the time (p. 617).

Like other journalists chronicling the war, Karnow included little analysis of the Vetnamese perspective on the conflict. Vietnamese perspectives come only in retrospective quotations from North Vietnamese leaders, clouded by years of historical revision by the communist government that now rules Vietnam. Karnow’s Vietnam also suffers for its breadth. Faced with the daunting task of covering nearly two centuries of history in just under 800 pages, Karnow could not linger on any single topic. Events where he did linger were chosen arbitrarily based on interesting anecdotes he could impart, rather than on their significance. Most fundamentally, however, Karnow had no argument to make. He simply retold the story of Vietnam. As a result, Karnow’s Vietnam: A History ends up being less a history than a chronology.
Posted by Pat Proctor at 09:08 No comments:

Pat Proctor
Manhattan, Kansas, United States
Military professional, writer, and computer wargame developer. Pat is a veteran of both the Iraq and the Afghan war with over twenty years of active service. He is also an avid writer in the areas of national defense policy and foreign affairs.