The American Way of War


Much has been written about the particulars of the air war in Vietnam, from the massive bombing campaigns over North Vietnam to the use of strategic and tactical bombers in support of ground forces in South Vietnam. But the majority of work in these areas has been focused on the technical aspects of the use of air power--tactics, types of aircraft, and types of munitions. In Air Power and the Ground War in Vietnam, Donald Mrozek goes beyond the “how” of the use of airpower in Vietnam to answer the much more interesting question of why it was used in this way.  In the process, Mrozek ends up using air power as a tool to illustrate a much larger point about the American way of war.

Air Power and the Ground War in Vietnam begins by examining the evolution of air power theory up to the start of the Vietnam War.  The book then delves into the struggle to make profoundly conventional American air power fit with the various conceptions of the nature of the Vietnam War.  Where Mrozek takes a fascinating turn is when he departs from the well-worn discussion of tactics for the use of air power and delves into the organizational pressures, both internal to the Air Force and between the services, as they fought for predominance in the control and use of various types of air assets inside the Southeast Asian theater of operations.

Mrozek concludes, among other things, that American air power was in some circumstances a poor fit for Vietnam.  For instance, helicopters used in air mobile operations were antithetical to counterinsurgency, which required a clear-and-hold methodology.  In other circumstances, Mrozek concludes that air power was misused.  The Johnson administration, in particular, repeatedly tried to use strategic bombers as a method to send political signals to the North Vietnamese--messages that were often inscrutable to the communists.  Finally, Mrozek concludes, “The starting point for all appraisals of the Vietnam War on the tactical and operational level--the realm of means and instruments--must be that it was fundamentally a failure in conception and vision on the strategic level” (p. 155).

In this final conclusion lies the only problem with an otherwise excellent book.  At the end of an in depth examination of why air power was used as it was in Vietnam, Mrozek then concludes that the strategic ends America chose for the war were fundamentally flawed.  The concluding chapter of Air Power and the Ground War in Vietnam raises a number of excellent points about the basic strategic conception of the Vietnam War that the rest of the book, because it is ultimately a book about uses of air power, is not able to explore.  One is left wishing for another book to discuss these broader conclusions in detail.
Posted by Pat Proctor at 19:00 No comments:

The Making of a Quagmire

Jeffrey P. Kimball, To Reason Why: The Debate about the Causes of U.S. Involvement in the Vietnam War, Eugene, OR: Resource, 1990, 384 pages.

To Reason Why is a collection of answers to a single question: how did America become embroiled in the Vietnam War?  Unlike Jeffrey Record’s The Wrong War, which reviews schools of thought on a similar question (why did America lose the Vietnam War?) in order to reach its own, independent conclusion, Jeffrey Kimball simply catalogues the answers of others, with no attempt to answer the question himself.  The book begins with a very thorough historiography that organizes the arguments of scholars, politicians, and opinion leaders into schools of thought.  The remainder of the book consists of excerpts of the actual arguments as written by the people who made them.

Jeffrey Kimball groups all of the arguments in To Reason Why into seven broad categories--“the official view” (containment and the “domino theory”), “states of mind” (leaders became fixated on the Cold War context of the Vietnam War), “the process of involvement” (once escalation began, it took on a momentum all its own), “the buck stops here” (the presidents were the driving force behind escalating involvement), “the advisers” (the men closest to the president drove the country into war), “pressures and aims” (political and economic forces propelled American leaders into the war), and “ways of living” (the interaction of American and Vietnamese culture drove America into the war).
While Kimball never posits an answer of his own to the question of why the US became involved in the Vietnam War, this is not to say he does not have or express an opinion.  While he never indicates to which school of thought he subscribes, Kimball dismisses out of hand what he calls the “official view,” that America fought the Vietnam War as part of its policy to contain the expansion of communism.  Kimball writes, “Most academics would probably maintain that the official argument is on the whole false and not worthy of serious consideration. Yet others continue to use it to explain why the U.S. government intervened in Vietnam and should intervene in other ‘Vietnams’” (p. 22).

By not advocating a point of view himself, Kimball leaves the reader free to draw his own conclusions.  This might be frustrating for the more casual reader who might prefer a thesis-argument-conclusion presentation to the more open-ended form that To Reason Why provides.  Additionally, while Kimball’s historiography is very thorough, the excerpts he provides are sometimes not long enough for the reader to thoroughly evaluate the merits each argument.  However, as an exercise in cataloguing the many answers to the question of why American became trapped in the quagmire of the Vietnam War--which is, to be fair, Jeffrey Kimball’s intent--To Reason Why is beyond reproach.
Posted by Pat Proctor at 09:30 No comments: 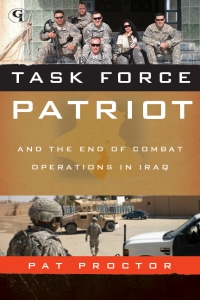 The website for Task Force Patriot and the End of Combat Operations in Iraq has launched .  You can see it at:

At this Website you will find additional resources related to the book, including multimedia content such as pictures and video taken during Task Force Patriot's last tour in Iraq, as the last combat force to occupy Saddam Hussein's hometown of Tikrit. You will also find the latest reviews and news related to the book and my appearances to promote it.

Task Force Patriot will be publish by Government Institutes Press, an imprint of Scarecrow Press. The expected release date is in December 2011.

For more, click here.
Posted by Pat Proctor at 12:34 No comments:

Pat Proctor
Manhattan, Kansas, United States
Military professional, writer, and computer wargame developer. Pat is a veteran of both the Iraq and the Afghan war with over twenty years of active service. He is also an avid writer in the areas of national defense policy and foreign affairs.